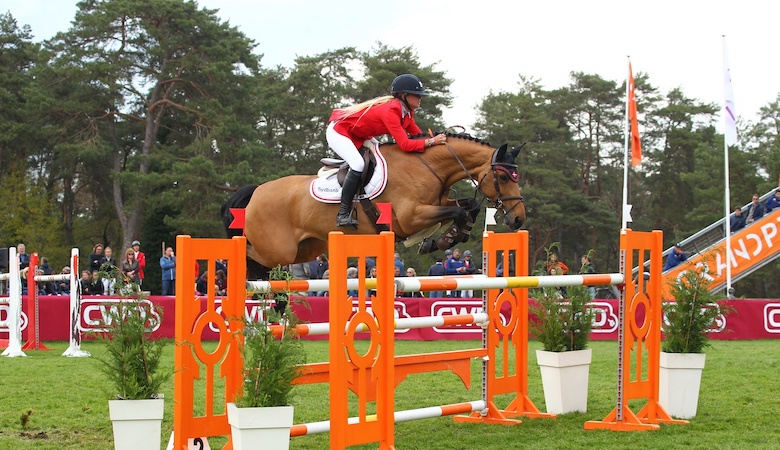 The Young Riders Nations Cup presented by Animo offered a beautiful show. While the French team had a strong collective performance, they still had to lose to Denmark, who were able to count on Clara Hallundbaek’s magnificent double clear round. Belgium took third place.

For her second participation in the Nations Cup, Alice Vancrayelynghe impresses, and delivers one of the best performances of the competition.
Credit: PSV Morel

After the Irish victory in the Junior World Cup, five countries competed in the Young Riders Nations Cup proposed by Animo. The Danes won thanks to their consistency and beat an attractive French team to second place. However, it wasn’t all that simple, as the track proposed by Gregory Bodo played its part in the first round of this Nations Cup, with a delicate triple. By deliciously using the height irregularities of the Grand Parquet, the chief of the track technically put a good number of riders to the test. The Spaniards were particularly destabilised, as Carlos Lange Fraile, who ran off the track with seventeen points, was one of them. His compatriot Gustave Angeloz, riding Argentina Chevrier, also scored a heavy 28 points, certainly due to the lack of experience of his nine-year-old mare. The winners of the day were also not spared as its first two representatives, Christina Nielsen and Alexander Godsk, were penalized by eight and sixteen points respectively. This last score is also that of Alexandre Carlet with Sanga du Garret who has retained his chestnut less than usual and thus seemed in difficulty. On the contrary, some pilots have strongly impressed the Belgian public. This is the case of French rider Alice Vancrayelynghe on her jumping Ipsy, for their second participation in the Nations Cup. The couple started the event magnificently with one of the only three clear rounds of this first act and gave France the chance to hope for a happy ending. Swiss rider Guillaume Gillioz and his mare A l’Amour de Longpre also convinced by finishing their tour without penalty.

A SECOND ROUND WITH TWISTS AND TURNS
However, a second round rarely resembles the first. Thus, the only Swiss rider who had a perfect run in the first act came out with sixteen points for his second run. And despite the good performance of her compatriot Aurélie Rytz with her splendid Hus Vodka stallion, Switzerland finished at the foot of the podium, in fourth place. A disappointment for the winning team in the same event a year earlier. For the Spanish team, the second set also did not rhyme with redemption, as they took last place with a consistent total of forty-seven points. The Belgians took advantage of these poor performances to make up for the delay in the first set. Thus all the riders, with the exception of Maartje Verberckmoes who scored two four points, improved their first set score and thus came back ahead of the Swiss. However, they did not succeed in overtaking the French team, which defended itself brilliantly, as shown by Alexandre Carlet’s performance in this second moment, proudly off the track without penalty. Arthur Deuquet and Nina Mallevaey were very consistent with a double four points for one and a first set of five points and a second set of four for the other. Nevertheless, Alice Vancrayelynghe’s performance once again won over the audience, despite a small mistake in the second obstacle of the triple. “I am very happy with the mare’s performance because this is our second Nations Cup together, after Opglabbeek where we scored four points twice. Despite a slight mistake in the triple, I am delighted with her behaviour,” said the young rider. But the Tricolores found better than them today with the Danish team. Carried by the double zero of the excellent Clara Hallundbaek in the saddle on a son of Baloubet du Rouet, Hh Best Buy, the team in the red jacket was able to maintain its lead. Emil Hallundbaek didn’t even have to start in the second set thanks to his team’s nine point lead over Les Bleus. “My team got off to a good start and I had a very good feeling. Moreover, beating great teams on such a prestigious field as Fontainebleau is a real pleasure,” concluded the Danish team leader, Bo K. Müller, who had already enabled this team to finish second last year.