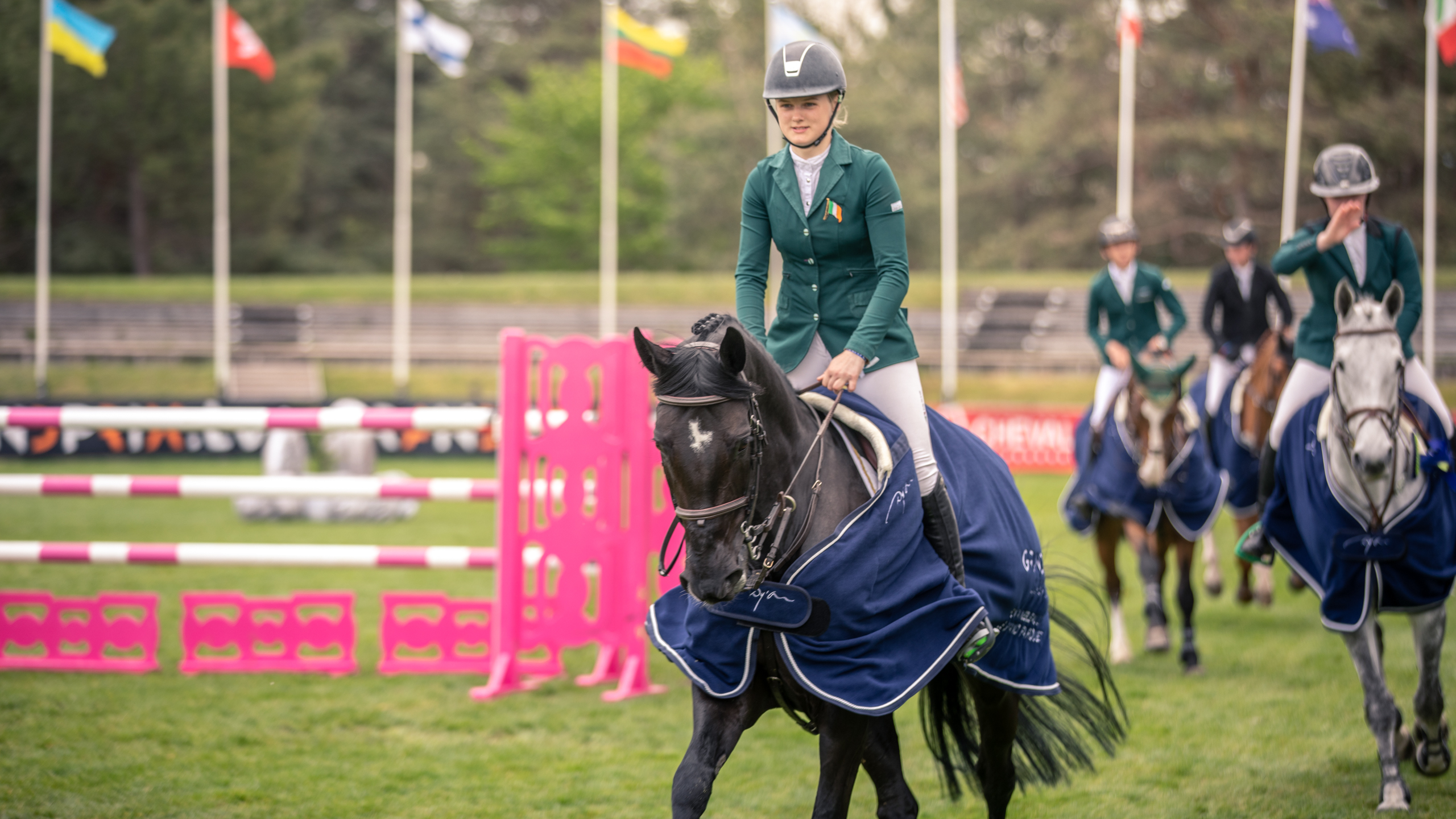 The suspense was high this afternoon for the Junior Nations Cup presented by Parlanti Passion. Seven nations came to contest the victory, and while Belgium held the lead in the first half of the event, Ireland finally turned the situation around. The French were honoured by third place for their strong performances.

On the stormy Grand Parquet of Fontainebleau, the course, designed by Grégory Bodo, put many riders in difficulty, especially the double 7A and 7B, in downhill, scoured the ranks a lot.

Belgium held the first round

France, which started well thanks to the performance of Dylan Rigot and Tip Top des Vans, unfortunately encountered some difficulties. If the rider in the blue jacket kissed his horse at the end of the track, after having made a beautiful first clear round, Jeanne Sadran had difficulties in the double, and drop down the obstacle following the river. His compatriot Valentine Delaveau also failed in the doubles exit. A mistake that didn’t distract her for the rest of the lap. Then, neck and neck with Ireland, also with four points on the scoreboard after the passage of four riders, France’s destiny weighed on the shoulders of the young Antoine Ermann. Unfortunately, and despite a very serene journey, the couple made a mistake on the river.

The French counter was therefore at eight points, while the Irish counter was equal to the Belgian one: four points. If the Belgians, winners of the Nations Cup last month in Opglabbeek, had started this event in very good conditions, they are finally joined by the Irish in first place provisionally in the last rotation.

For the second round, only six of the seven teams were allowed to start again. With 36 points on the scoreboard, the Swiss riders were unfortunately unable to continue the competition.

A second round full of suspense

It is impossible to separate France, Ireland and Belgium until the third starter of each team. Dylan Ringot, Gilles Nuytens and Kate Derwin, the first starters of each team, signed two clear doubles. Valentine Delaveau and Jeanne Sadran finally came out with four points. France therefore remains third on the podium. Antoine Ermann, France’s last round, doubled the score, a particularly admirable performance for his first participation in the Nations Cup. Patrice Delaveau’s daughter said: “I am very happy for the team, there have been some great runs. I am particularly proud of Antoine’s results, who was competing in his first Nations Cup. He has no experience of this competition and had the tough responsibility of starting in fourth place. As far as I’m concerned, I’m not satisfied with my tricks. I have made mistakes that I don’t usually make, but it doesn’t come from my horse. He was great.”

While she was sure to climb on the first step, Ireland chose to preserve her last couple Jason Foley passed her turn thanks to the magnificent clearances of her teammates, even if Harry Allen scored one time point. Jason expressed his pride: “I am very happy with our performance. Personally, I’ve been riding Uncas S since Monday, and I’m proud to have achieved such good results. The track was difficult to climb, especially the last combination.”

If Belgium has not managed to regain control, it has nothing to be ashamed of with its riders. Gilles Nuytens and Tim Prouvé signed two perfect laps. Constance Adam and Emilia Housen left one and two bars on the ground.